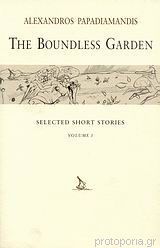 The Boundless Garden (Volume I)

Alexandros Papadiamandis (1851–1911) lived in the midst of an uncertain age of transition for modern Greece. It was a period of post-Enlightenment turmoil that followed closely on the heels of Greece’s War of Independence, when the traditional old ways were being undermined and were fast disappearing under the pressure of the indiscriminate adoption of western mores and ideas. His reflections on and observations of some of the most complex facets of Greek life in both his native island of Skiathos and in urban Athens during this time define the modern Greek experience in a manner unattained by any of his now forgotten contemporaries. His loving attachment to the old traditional ways have marked him out for some as conservative, even reactionary, but it was an attachment tempered with an innate and deep understanding of how the past breathes life into the present, an understanding which is as relevant in our times as it was in his.

The stories presented in this selection encompass the main and universal themes that best exemplify his work. In them he records and recreates that modern Greek experience as it was lived in its many perspectives — displacement, emigration, home-coming, estrangement, exile, attempts to reclaim lost innocence, visions of Paradise, the daily struggle for survival — and explores the souls of men and women as they succumbed to or struggled against the power of evil and dealt with life’s ambiguities. Within these themes Papadiamandis also embraced the mythic past as it survived through people’s belief in supernatural wonders and which animated the countryside with haunted ruins, nymphs and fairies and the sea with mermaids and Tritons. His was an authentic expression of a reality that he saw as a seamless whole in which man, whether or not he was conscious of it, spirits and the natural world all participate in a living liturgical now, ever moving towards their eternal source.

Papadiamandis’s stories . . . are more than interesting vignettes of early modern Greek fiction writing. Scrupulously coloured, achieved through the clarity of their tiny details and the author's compassion for human vulnerability, they convey a world of profoundly contemporary reality, in which one touch of nature still “makes the whole world kin”.’