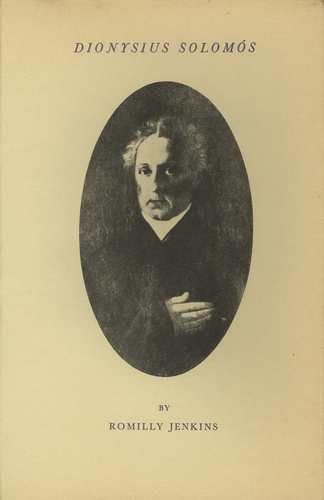 Dionysius Solomos (17987–1857) has been called by many the ‘father of modern Greek poetry’ in that it was he who, in the opening decades of the nineteenth century, rebaptized Greek poetry in the ancestral springs of inspiration and language and gave it an orientation that has been followed by such major poets as Palamas, Sikelianos and Seferis. ‘With Solomos,’Zissimos Lorenzatos has written, ‘the problem of artistic expression enters our cultural life, as the problem of independence entered our national life.’

This book was the first, and still is the only biography of Dionysius Solomos in print in English. Its author preferred to describe the book in his Foreword as ‘not a formal biography, but only the slightest of sketches’, and therefore thought it unnecessary ‘to give lists of references to sources in the footnotes’. But he demurs too much, for although other studies published subsequently may have provided more information and critical analysis of Solomos and his poetry, Romilly Jenkins paints his portrait of the poet and his work in broad and sympathetic strokes that makes his subject come alive for the English reader. Undoubtedly, the times in which Jenkins wrote and published his study, at the outbreak of the Second World War, inspired his empathy for his subject. In the first pages of the book he writes:

There is, however, more than one reason why we in England should remember Solomos at the present time: that he was a great lyric poet, that he is entitled to a distinguished place in that extraordinary galaxy of talent which characterized early nineteenth-century Europe, that his services to the Greek language and even more to the Greek spirit were immense, are propositions which no one will dispute. But it is also not inappropriate to recall one who was an implacable hater of tyranny, a fanatical lover of liberty, a prime force in expelling an alien dominion from a country, then feeble and wretched, but whose name no educated person can hear without a sensation of gratitude and sympathy.

But this recognition in no way clouds his acute and concise assessment of the poet which remains as valid today as when it was written.

This edition is a reprint of the 1940 Cambridge University Press edition.