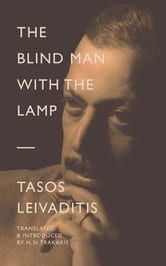 Tasos Leivaditis (1922–1988) is one of the unacknowledged greats of Modern Greek literature. Not only is he unacknowledged in the English-speaking world, largely because nearly all of his writing remains untranslated, but he also has limited recognition within modern Greek literary circles, where he is often overshadowed by twentieth-century giants such as Cavafy, Seferis, Elytis, Ritsos and Kazantzakis, who have become established names in the literary world at large. The Blind Man with the Lamp, originally published in Greek in 1983, is the first English translation of a complete collection of poetry by Leivaditis. A pioneering book of prose-poems, Leivaditis here gives powerful voice to a post-war generation divested of ideologies and illusions, imbued with the pain of loss and mourning, while endlessly questing for something wholly other, indeed for the holy Other.

A substantial introduction by the translator, N. N. Trakakis, situates and reviews the poet and his work within his times with special reference to this present collection.

‘In The Blind Man with the Lamp, Tasos Leivaditis takes up the haunting paradoxical temperament of the prose poem, and carries it into a register of existential fatigue and disquiet. . . . Yet these precise and fluid translations from the Greek by N N Trakakis — the first English translation of a complete collection by Leivaditis — emphasise that while the biological kernel of these poems can hardly be denied, the book clearly emerges in the shadow of failed political visions. Behind it lies a questioning not only of political dogma but of humanity itself.

‘The liminal is a recurring trope of the book. Time and again, Leivaditis returns to images of dusk, night, outcasts, doors, dreams and silence. Though what is perhaps most striking about The Blind Man with the Lamp is how this sense of potential and inevitable night is combined with an acute theological yearning. Leivaditis seems to recognise that an entirely new world is not possible. His God seems to dwell, suspended, in absence.’